This week’s Friday Fibers Roundup spotlights a variety of exhibition reviews and previews spanning from local (LA, NY, and Chicago), to international (Japan, Peru, and Germany). 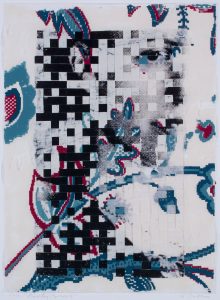 1) “What Does It Mean to Make Art in the South Asian Diaspora?” by Hrag Vartanian reviews the exhibition, concepts, and issues within the work at Lucid Dreams and Distant Visions at the Asia Society Museum in New York (via Hyperallergic).

2) Every year, the two communities on either side of the Apurimac River Canyon use traditional Inca rope tying to rebuild the Q’eswachaka Bridge. Taking only 3 days, the old bridge is taken down and a new one is created.

3) “Where Art meets Craft” by Alison Gillmor previews C2, a new center for craft and art opening in Manitoba that will include a gallery, shop, library, museum, and workshop spaces to showcase both historical and contemporary craft.

4) Yayoi Kusama–one of the biggest interdisciplinary artists in the world–is opening her own 5-story museum in Tokyo to house her celebrated, eclectic, and vast lifetime of work (via Dazed).

5) This behind-the-scenes video shows one of the largest prints ever–the Triumphal Arch for the Holy Roman Emperor–created by Dürer. At nearly 9 feet tall and consisting of 36 sheets of paper, this print was made using 195 different woodblocks over the span of two years (1515 and 1517).

6) “Waxing Poetic With Batik Designs” reviews the exhibition Batik Textiles of Java at the Art Institute of Chicago which explores the diversity of Java’s batik textiles as well as the relationship and influence of the trade routes with Europe, Arabia, India and China (via New City Art).

7) 2017’s Documenta–a quinquennial exhibition in Kassel, Germany–featured many large-scale textile installation works for one of the first times (via Dowse).

8) A new curatorial lab based in Southeast Queens, NY is inviting emerging curators and arts professionals to apply to co-curate exhibitions in the No Longer Empty space (via Hyperallergic).

9) The Textile Forum Blog recently put out a gallery and review of their top choices from the 2017 Rijswijk Textile Biennial (Netherlands).