Knitting is the name of the game for all the articles featured in this week’s edition of Friday Fibers Roundup. 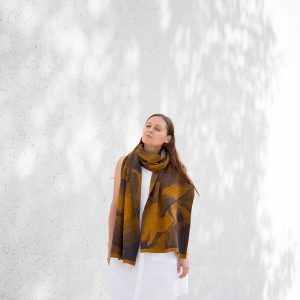 1) “Knitting Together the Beginnings of a Queer, Feminine Future” by Zachary Small highlights how the exhibition Studio Views: Craft in the Expanded Field reimagined the Museum of Arts and Design’s third floor gallery space. The show acted as an artist’s studio for two, both demystifying the process of fiber art making and allowing the artists to dialogue with a curious public (via Hyperallergic).

3) “Med student stitches unique study aids” by Gretchen Rubin looks at how a Daniel Lam used hand-knit models to learn anatomy and inspire his classmates (via The University of Chicago).

4) This video shows fiber artist Jacqui Fink and her love of extreme knitting.

5) Melinda K. P. Stees uses a vintage knitting machine and a lot of handwork to create knitted interpretations of photographs, sketches or graphics (via Explore Fiber).

6) The collaboration between Joseph Ford (photographer) and Nina Dodd (knitter) seamlessly camouflages people into backgrounds using knitwear (via The Guardian).

8) This photo titled Repairing the Streets with Knitting: Brick by Brick, One Yarn Brick at a Time is a beautiful example of yarn bombing (via Knit Hacker).

9) The exhibition Scrolls is on display at the Mesa Arts Center in Arizona until April 15th, 2018.