This week’s roundup focuses on highlighting a variety of voices and experience, and how they are expressed through the medium of textiles. From perforative fashion, to interactive installation, each story is worth hearing. 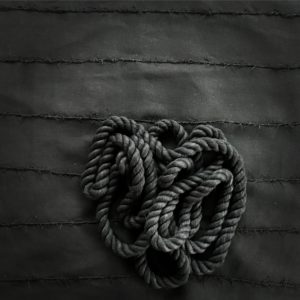 1) Jono Vaughan’s series Project 42 addresses the pattern of violence against transgender people in the United States, providing both a form of memorialization and an entry point for engagement and discussion. The show is on display at the Seattle Art Museum until August 5th, 2018.

2) “Beyond the Surface: Miriam Schapiro’s Enduring Legacy Is on Full View at the Museum of Arts and Design” by Claire Selvin examines the phantasmagorical world in which Schapiro creates psychedelic patterns dance on televisions wrapped in vibrantly colored paper and canvases teem with multicolored flowers (via Art News).

3) “Yale University Exhibit Sews Together Textiles with Texts” by Tracey Greenstein looks at how the exhibition connects fabric references woven throughout ancient and modern texts to notable historic and cultural events surrounding textiles, underscoring their latent and apparent impacts on society. The exhibit will run until August 12th, 2018 at Yale University in Connecticut (via WWD).

4) This video shows how a research team in Italy has constructed a 3D model of the body depicted on the Shroud of Turin that many believe to be Jesus Christ. The leader of the project, professor Giulio Fanti, has spent twenty years studying the controversial cloth and described the newly-unveiled 3D statue as a culmination of that work (Coast to Coast AM).

6) The Flint Institute of Arts kicks off its 90th year with the opening of Ubuhle Women: Beadwork and the Art of Independence. The exhibition showcases a form of bead art—ndwango (cloth)—developed by a community of women living and working together in rural KwaZulu-Natal, South Africa (via Art Daily).

8) “This 1,000-Year-Old Shirt has a $700,000 Story to Tell” by Elizabeth Paton looks at the garment of a lost empire and why one-of-a-kind golden silk samite shirt is selling for so much (via The New York Times).

9) The Ruskin Museum (UK) is hosting an exhibition which highlights the role of Lakeland women in producing high quality textiles in the years up to the First World War.

10) The Art Institute of Chicago announced that Melinda Watt has been appointed the new chair and Christa C. Mayer Thurman Curator of Textiles. She will oversee the institution’s collection of more than 13,000 textiles and 66,000 sample swatches ranging from 300 BCE to the present (via Artforum).