This week’s roundup brings together recent articles on embroidery, from hip hop fashion, to smart fabrics, and an artists that works between North and South Korea. 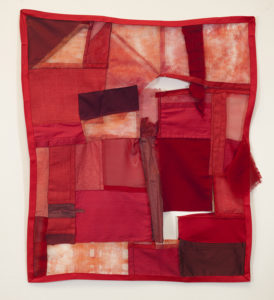 1) The exhibition Organic Explorations features the work of Ellen Schiffman and Heide Follin who work is inspired by observing organic and symmetrical forms in nature and their travels for discovery. The show is on display at the H. Pelman Curtis Gallery in New Canaan, Connecticut from August 9th to September 23rd, 2018.

2) The video “Hip-Hop’s Cross-Stitch Gawd” spotlights the work of Emma McKee, the artist behind so many of Hip Hop’s iconic embroidered fashion pieces.

3) “Embroidering Electronics into the Next Generation of ‘Smart’ Fabrics” explores how smart fabrics are becoming more and more in today’s society, with potentially promising uses in healthcare, defense, cars, and even smart cities (via The USA Bulletin).

4) “An Artist Unites North and South Korea, Stitch by Stitch” by David Segal looks at the brave work of Kyungah Ham, who has been producing designs on her computer, then printed and smuggled into North Korea, then a group of anonymous artisans are paid to convert them into embroideries (via New York Times)

5) “DMC Stitch Contest Provokes Artists to Submit Subversive Designs” by Abby Glassenberg looks at how DMC needed to edited their Instagram posts about the contest to now include a $500 prize, initially only offering artists “exposure” as payment (via Craft Industry Alliance).

8) “You’ve Been Threading Needles Wrong Your Whole Life” by Orli Matlow looks at all the various ways we’ve worked to get our needles threaded and one simple video that might blow your mind (via Some ECards).

10) “Catholic-Inspired Met Gala could be the Most Controversial” by Raquel Laneri looks at the tumultuous history fashion and pop culture have had with Catholicism, and what that means for the Met’s current exhibition: Heavenly Bodies: Fashion and the Catholic Imagination (via NY Post).