This week’s Friday Fibers Roundup features a combination of forward-thinking fashion, digital textiles, and a call for entries that meshes traditional and digital technologies. 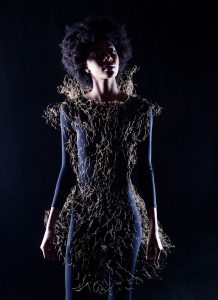 1) “Touch and Electronic Textiles” by Ricardo O’ Nascimento explores the use of capacitive sensing in textiles through various national and international projects (via Medium).

2) Mechanization, Material, and the Matrix is the Fiber Arts Network’s third annual international juried exhibition, and will be highlighting works focusing on meshing traditional material practices and technology. The deadline to apply is August 25, 2017.

3) “Synthetic Fabrics Inspired a Cultural Revolution” by Amanda Woytus looks at the cultural, political, and economic impact of the creation of synthetic fibers such as lycra and nylon (via JStor).

4) The Weaving Lab: Plain Cloth Productions at University of Wisconsin: Madison (now in its second year) allows community members to come in and weave on five floor looms for free to encourage artistic investigation.

5) Lia Cook has a new exhibition opening soon. Coded Threads: Textiles & Technology will be on display at Western Gallery at Western Washington University from September 27 to December 8th, 2017, with an
artist lecture on October 5th at 5pm.

6) This video shows how beautiful textiles can be made entirely from spider silk.

7) “Translating Computer Algorithms into Tangible Fabrics” by Claire Voon spotlights the work of Phillip Stearns and his pillows, tapestries, and other household objects created from digitally complex computational processes (Hyperallergic).

8) “The Rebirth of Paul Poiret” by Astrid Wendlandt looks into the hiring of Sino-Parisian designer Yiqing Yin to resuscitate the early-1900s French couturier label, which could appear as early as March 2018 at Paris Fashion Week (via New York Times).

9) The Fiber Lab (in Somerville, Massachusetts) is an independent study group with classes beginning again on September 23, 2017. With a focus on a myriad of fiber techniques and alternative materials, this group is fostering a critical fibers community.