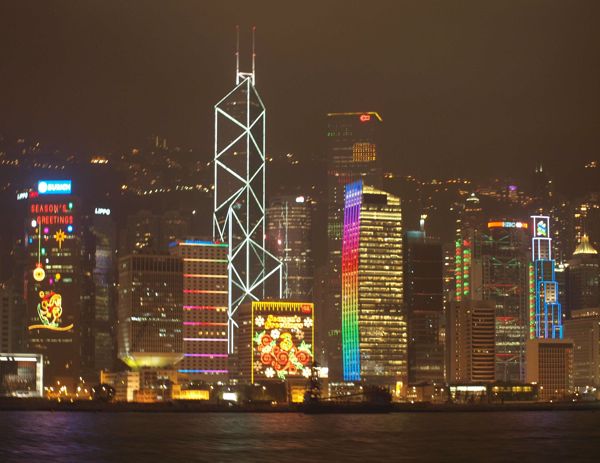 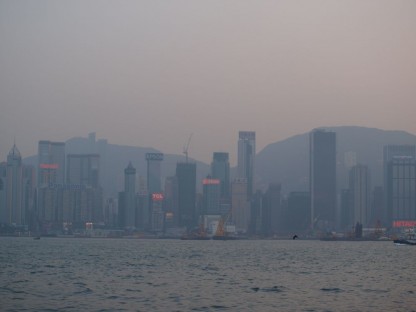 It’s a good time to pause and reflect on what I saw, what I learned, and the impact this quadrennial event has had on me. Was it worth all the time, money, and air miles to fly half way around the world to be in the company of 200 other textile artists, artisans, and scholars who share a love of resist-dyed cloth?

Short answer: YES – for both the immediate experience and for its long-lasting effects.

Hong Kong was a thrilling city to visit. The energy of ambition and sky-scraping urbanism of this crossroads between East and West make Manhattan seem meek and mild. Just a swamp 140 years ago, there are now 70 million people in the greater Hong Kong region, driving the economic engine of the new China. Seeing it first-hand brought this reality to life. 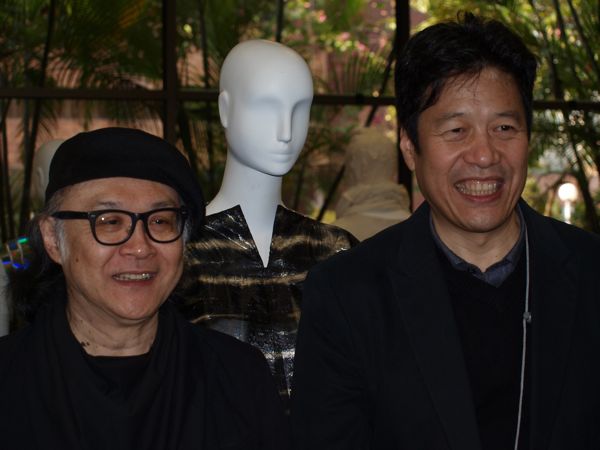 The 6-day conference was invigorating. Talks – on everything from Eastern Chinese clamp-resist dyeing techniques to the latest research on Indian saris to eco-trends in the Japanese textile industry in the aftermath of last year’s tsunami – were thought-provoking. The topics were dictated more by the roster of Chinese scholars and specialists on Hong Kong’s 8ISS planning committee (and Yoshiko Wada’s impressive international Rolodex of invited presenters) than by any rules about what shibori is and isn’t – which made for great cross-pollination of ideas between people. 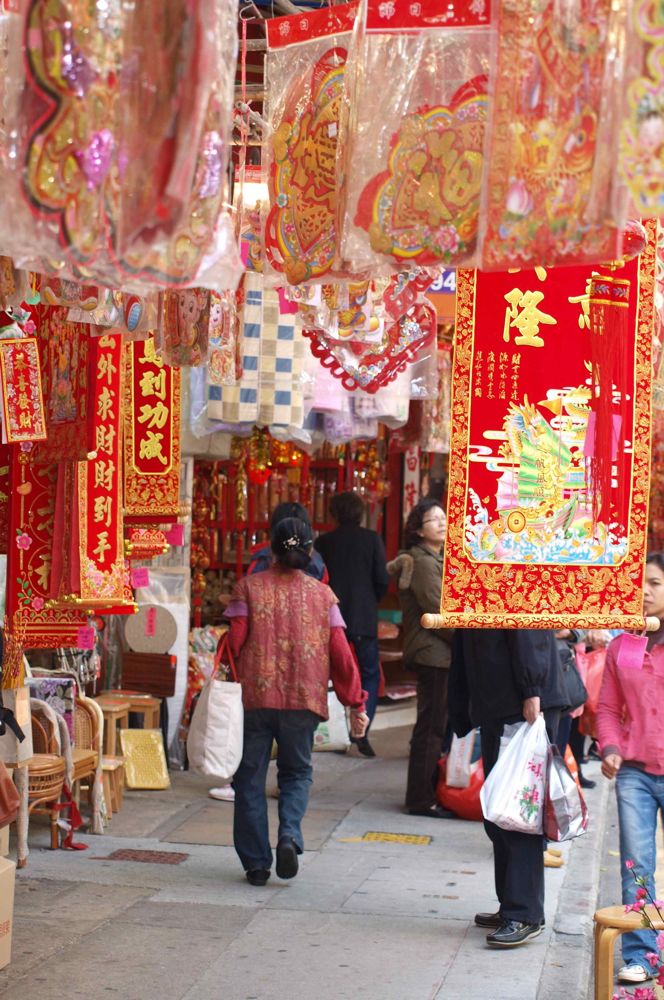 Vibrant conversations with other attendees after each session left me with the deep feeling of satisfaction that comes from being “among my people” – a high that lasts for months every time I attend a high-quality conference. Apparently 8ISS was quite an historic event for Chinese attendees, as conferences are usually planned “top down” within institutions or government organizations. Contrary to this usual approach, 8ISS was planning was open and “bottom up.” Ideas and suggestions from the steering committee members were incorporated resulting in the invitation to both  Chinese and international audiences to submit art and design work as well as research papers and personal accounts of their creative pursuits.

The timing of the symposium – during end-of-year/New Year holiday season – dampened attendance of the Western contingent but attendees from China found it convenient. 90 mainland Chinese were drawn to the event in addition to those from Hong Kong, making the mix dynamic and rewarding. A Chinese-only 8ISS website and registration system had to be devised to accommodate the mainland participation! 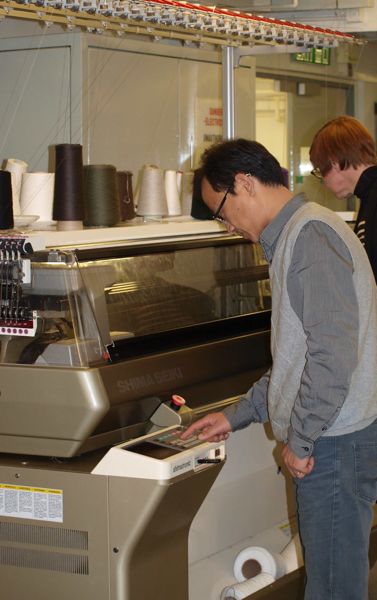 HKPU’s facilities were a revelation to every Westerner in attendance. Despite the premium on space in this over-crowded city, the textiles lab was an underground workshop, at least the size of a football field, filled to bursting with state-of-the-art equipment: 3-D laser cutters and printers, huge heat presses for disperse dyeing, rooms full of jacquard looms, spinning machines, and whole garment knitting machines, plus labs for bio-textiles, nano-textiles and much more. To see what the future of textiles looks like, visit their Institute of Textiles and Clothing website.

The 8ISS experience made it clear to me that China really is rising, especially in the field of textiles, where it is a center of technology-driven innovation. I saw enormous potential for collaboration and cooperation with Chinese designers, artists and scholars – as well as intense interest in developing such partnerships. I also came to believe that if we in the West do not begin more focused investing in technology, more innovative use of techniques and materials, and more vigorous development of international ties, we will soon become a 20th century backwater in a 21st century world. 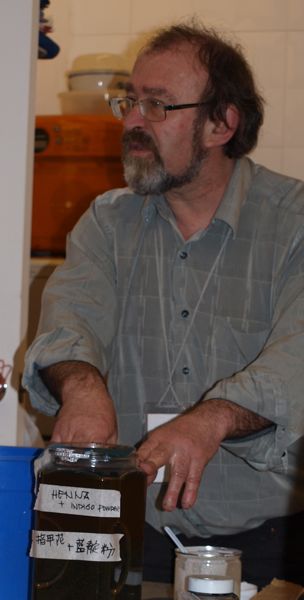 The outstanding  workshop options were an additional draw to 8ISS. Highlights were Michel Garcia, the French botanist and chemist, leading a hands-on session of natural dyeing with indigo and tannins, Genevieve Dion‘s exploration of seamless whole garment knitting and Jorie Johnson presenting shibori felting, among others. Participants could see the future, in which established techniques with a long history find new expressions, happening before their eyes. Thus the goal and mission of WSN – to promote sustainability and creativity in material transformation – was realized. 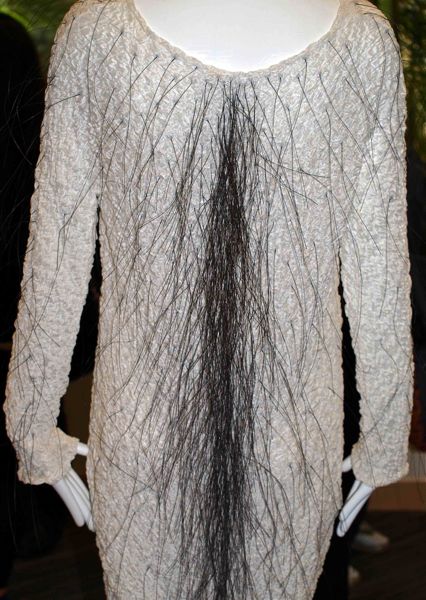 Other valuable insights I took away from 8ISS came from the exhibitions held in conjunction with the conference. Animal Fibers: Art Informs Shibori was a juried show held at the Hong Kong Design Institute’s new, purpose-built campus – a gleaming architectural complex housing an institution for design education institution that surely is one of most impressive in the world. The most striking work in this show was not fashion or conventional wall hangings. Monica Sepulveda’s Deconstruction for construction and Joanne Circle’s Violinna both integrated wood into their pieces, creating a strong visual counterpoint to the dyed cloth. Takumi Ushio’s Shelter and Barbara Roger’s Wrapped and Rolled were small sculptural pieces with a satisfying substance that went far beyond traditional shibori. 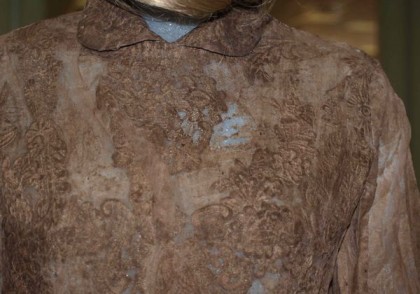 Energy Nexus was 8ISS’s invitational show in 2 parts: Wearable Art & Fiber Art. The “wearables” ran the gamut from conceptual to functional, but the pieces that have stayed with me used the most innovative materials and processes. Kinor Jiang, the 8ISS co-chair at the ITC facility at HKPU, uses electrolysis plating to create shimmering metallic fabrics with ghostly color shifts. Wanning Yu pierced white silk with black plastic spines that give the gown a striking animism. Chun Pang Stephen Fan’s dress of fused lace harnessed time and weather to distress and erode the tailored shift until it simulates something unearthed from an archeological dig. Fabulous. 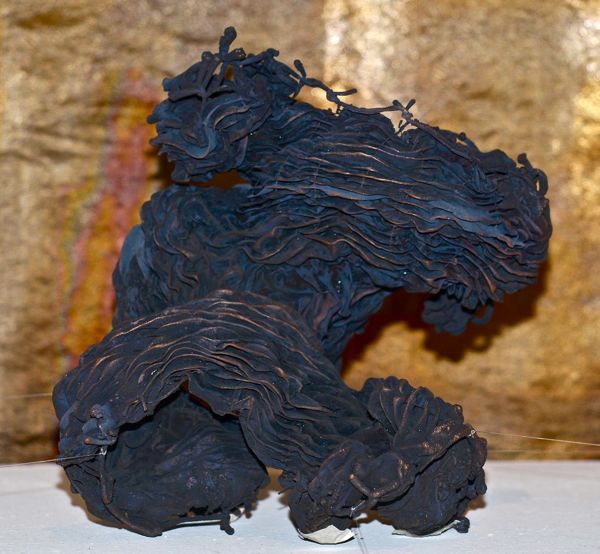 The Fiber Art show Energy Nexus: An Interpretation in Fiber 2-D to 3-D brought together top shibori artists from around the world; some familiar to us Westerners – some not. It featured some very strong pieces including new work by Frank Connet in which he electro-formed a piece of silk shibori leaving a fully metalized skeletal form that is more solid than cloth yet lighter and more transparent than metal should be. This untitled piece uses the language of textiles in a sculptural way that has real presence. It led me to realize that what I (and perhaps others in the art world) often find lacking in “fiber art” is the sense of substance that is experienced when form and content (or concept) take precedence over medium and technique. 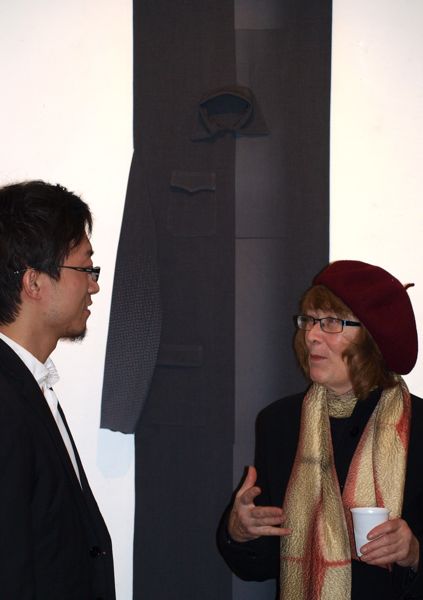 I also really enjoyed seeing the work of Guoxiang Yuan, who won awards in both the student show (he is a PhD candidate at HKPU) and the Junichi Arai Award in the fiber art show, selected by none other than Jack Lenor Larsen. Yuan’s use of laser etching on men’s suiting material that was made into menswear showed a thoughtful marriage of technology and tradition. It transformed a familiar piece of clothing into a conceptual apparatus. He is clearly one to watch.

Guoxiang Yuan also won the Gold Medal in the New Beat International Student Concours with a related piece entitled X=Y+tt. This show featured many strong pieces. I especially enjoyed the jewel-like Fossils by Asumi Hasegawa, who embedded small leather shibori pieces in sand-encrusted plaster and won 1 of the 4 Barbara Shapiro Awards. My own piece, Ancestor, also won a Barbara Shapiro award; especially exciting since it was my first entry into an international show. I left 8ISS realizing just how much more I have to learn and explore in the conceptual realm where textiles and sculpture meet: a place where textiles find form. 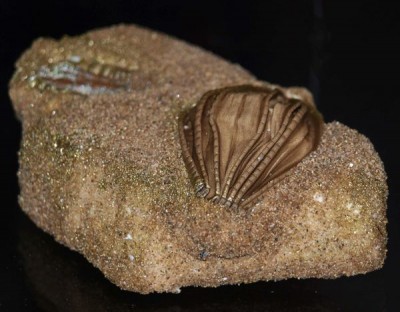 To view more images from exhibitions, link to conference proceedings at: myweb.polyu.edu.hk

You never know what will come from attending a conference like 8ISS. (Just ask all the ISS repeat-attenders.) For me it has meant a radical shift toward both sculptural techniques and non-fiber materials. Right now I’m using lichen and seed pods as my materials in order to break away from traditional expressions of shibori and find my own language.

Go all the way to Hong Kong to discover I’m at a pivot point in my art practice?

Yes – it was definitely worth the trip. 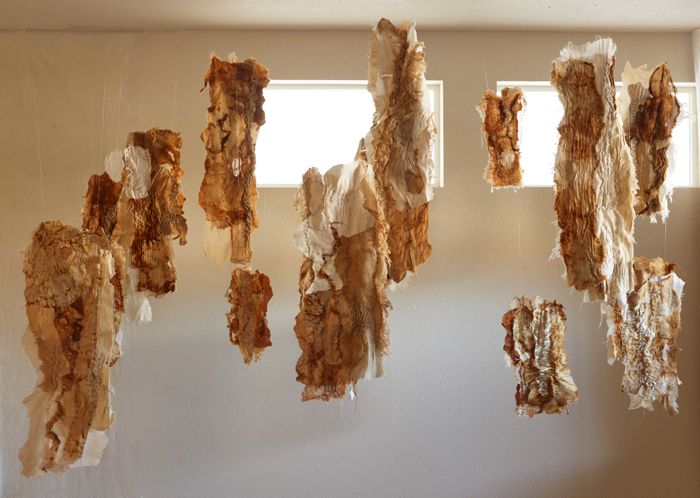 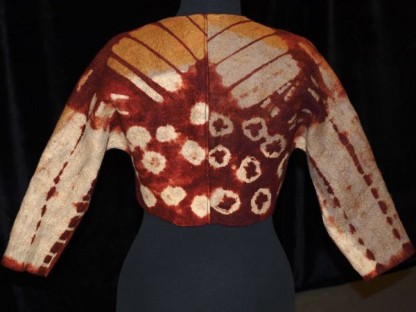 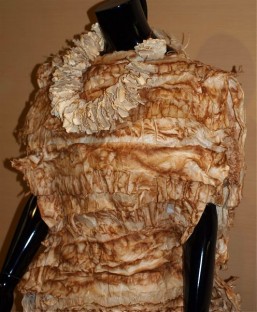 Surface Design Association has been represented at all ISS since 1992.
Surface Design Journal published reviews of past ISS in following issues:
Summer 1993, Vol 17, No.3: 1st ISS in Japan  (1992) when Charles Tally & Yoshiko Wada led the first SDA tour bringing some 68 SDA members to Nagoya.
Fall 1997, Vol 22, No.1: 2nd ISS in India when Marna Goldstein Brauner shared her experience of traveling to Ahmedabad.
Summer 2000, Vol  24, No. 4: 3rd ISS in Chile when Karren Brito reported from Santiago.
Since 2000, reviews of ISS were featured in SDA Newsletter (which became this digital NewsBlog in June, 2010).
This is the first SDA NewsBlog story about ISS. 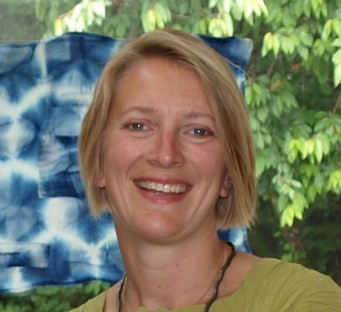 Christina Conklin is a textile artist living in Half Moon Bay, California. 8ISS was the 2nd International Shibori Symposium she has attended – the first being in England in 2002. After 20 years as a largely self-taught artist, Conklin is taking the leap into graduate school this fall in the MFA program at California College of the Arts in San Francisco. (She is shocked to realize that the old adage “life begins at 40” might actually be true.) View more of her work on WSN at shibori.org/members