“I Thought My Head Would Explode” by K. Johnson Bowles

This week’s blog article is an emotional and moving journey by K. Johnson Bowles about healing and processing of trauma through the making of art.

In 2019, I started a new body of work called Veronica’s Cloths. I had been in a job where I was subjected to threats, harassment, sexual assault, discrimination, retaliation, and defamation. Quite literally, I thought my head would explode from what I experienced. My mind raced as I hyper-processed the events. I couldn’t sleep. When I did, I had nightmares. I felt as if I couldn’t breathe. The only thing I could do was make art. I wanted to rid myself of hurt, anger, sadness, despair, loss, and fear. But what are the visual equivalents of those emotions? How could the invisible become visible without simply illustrating the experiences? 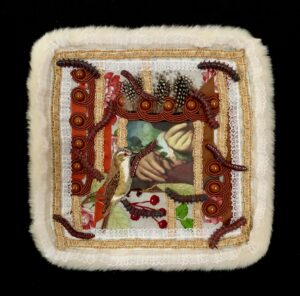 Those questions were the beginning of Veronica’s Cloths, an account of trauma’s residue depicted via assemblages of vintage handkerchiefs, photographs, appliques, trims, notions, and a fantastic array of plastic insects, spiders, and snakes (among other things). While I am not religious per se, the series title takes its cue from the legend of St. Veronica, who wiped the face of Christ with her veil as he carried the cross of his crucifixion. Allegedly, the image of his face was left behind on the cloth – a miracle of compassion and transference of pain. 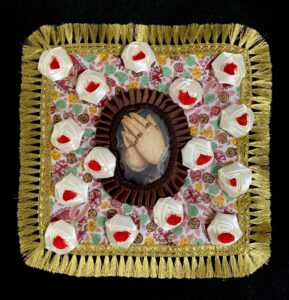 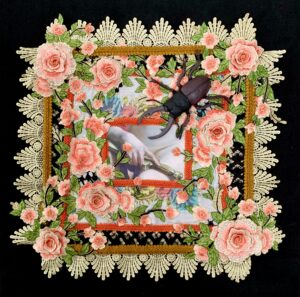 I love handkerchiefs. Seeking them out during journeys through antique stores, I get lost sifting through a basket of them craving the most vivid, finely embroidered, or meticulously tatted edges. In my mind’s eye, I conjure my mother painstakingly embellishing a crisp white piece of fabric to be given as a gift. I recall my mother and grandmother having handkerchiefs at the ready in a purse or the cuff of a blouse (or even tucked under a bra strap) to wipe a tear or to tidy a nose. 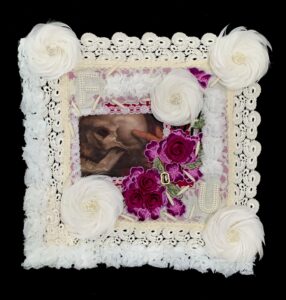 There is a poignant irony in a beautiful, sweetly colored, flowered piece of fabric being used to absorb sadness and pain. Its purpose destroys it, soils it, and makes it disgusting. And, then, over and over again, the object is put through a ritualistic cycle of careful cleaning and ironing only to be soiled once again. Even the act of bringing the fabric to one’s face is a private ritual like meditation. One looks into a mesmerizing kaleidoscope of color and symmetry. Images on the fabric’s surface come in and out of focus through blurry tears. The experience is a relief, grounding one in the present. It catches the ugly residue of what was once in an anguished mind. 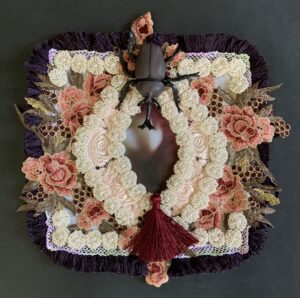 Similarly, each of the works in Veronica’s Cloths is a meditation, a ritual, a reservoir, and an uncanny valley. I get lost in eye-searing color, obsessive patterns, and incongruous textures used to encrust the handkerchief’s surface. I’m startled and repulsed by the ants, spiders, scorpions, and snakes writhing on the surface. Juxtaposing materials associated with maternal tenderness side-by-side items evoking terror and phobia conveys the cycle of compassion and transference of trauma. I destroy and reveal the surface over and over to make my panoply of emotions visible. 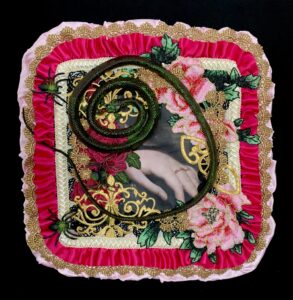 Peaking through the surface’s visual melee are photographic images heat transferred on to the handkerchief. These are images I’ve taken on trips to museums and in my garden. In museums, I photograph snippets of paintings, more specifically, hands implying a narrative and action. They signify how events are often recalled, and emotions are triggered for the traumatized. The photographs of blurry flowers are from my gardens and represent an inability to see beauty and experience joy, and feeling lost in a void. 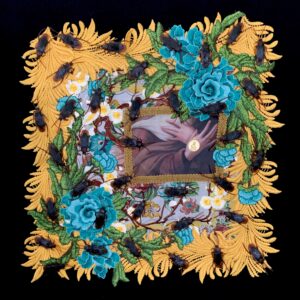 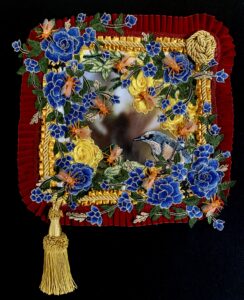 Occasionally, I include letters and words in the works to indicate the dialogue between object and owner like a monogram, title Mother, or name. However, it isn’t that specific or formalist. The images, words, and title of the pieces create conversations, as well as between the viewer and me, taking us on a non-linear journey of symbols, meaning, and thoughts on experience. Sometimes the titles I assign artworks are a play on words (or references to slang, truisms, adages, aphorisms, idioms, gnomes, hyperbole). Sometimes the titles point to narratives in myths, legends, folklore, and historical events–metaphors and lessons. For me, the titles of my works (and use of letters and words in the works) nod at illuminated manuscripts and the use of word ribbons or ‘banderoles’ in Renaissance period art, pointing to a narrative. 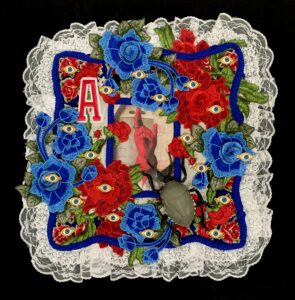 These thoughts here only delve into the significance of materials and the process of creating Veronica’s Cloths. Each piece in the series conveys an aspect of trauma and its impact, which is meant to be both specific and universal. While cathartic to me, I hope it will be to others as well. 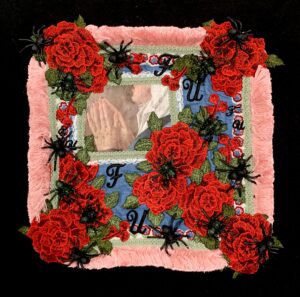