In the Loop 3: Knitters Unite in the UK 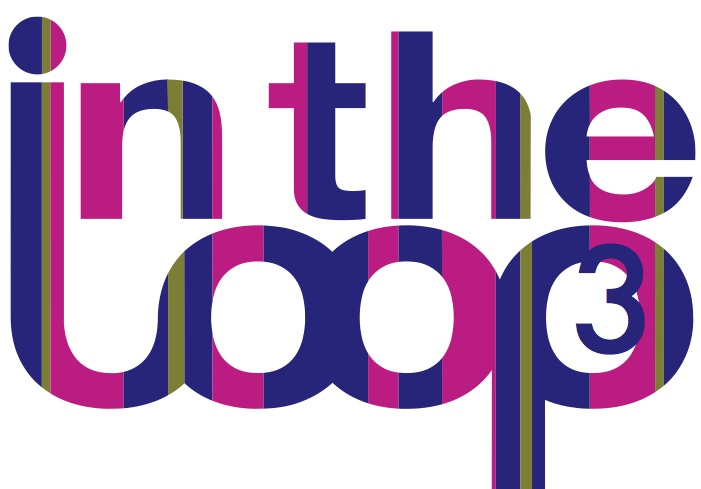 In direct violation of my personal travel aphorism ‘the farther you go the longer you stay’, I flew to the UK in September 2012 to attend the 3-day In the Loop 3: The Voices of Knitting conference. 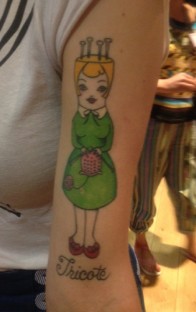 Held at the Discovery Center in Winchester (Hampshire County), England, In the Loop 3 was a small but dense gathering of academics, practitioners, enthusiasts and others. 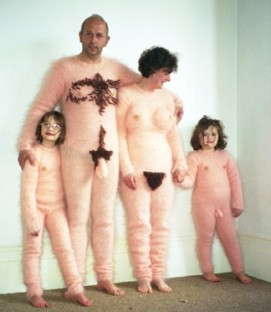 Presentations over the 3 days covered a wide range of topics – from Susan Strawn’s historic presentation Nordic knitting design: Cross-cultural Branding of the American Ski Industry to Introversion and Knitting, a talk by Dr. Jessica Hemmings which addressed knitting as a solitary rather than a social activity. It drew on the recently published book Quiet: The Power of Introverts in a World That Can’t Stop Talking (by Susan Cain).

Australian criminologist Dr. Alyce McGovern’s talk, Guerrilla Knitting: The Craft of Subversion?, was an unexpected address on yarn bombing from a legal point of view. The overall breadth of perspectives gave a solid sense of both knitting’s current popularity as well as its importance as an area of academic inquiry. Program brochure can be accessed at www.southampton.ac.uk/intheloop 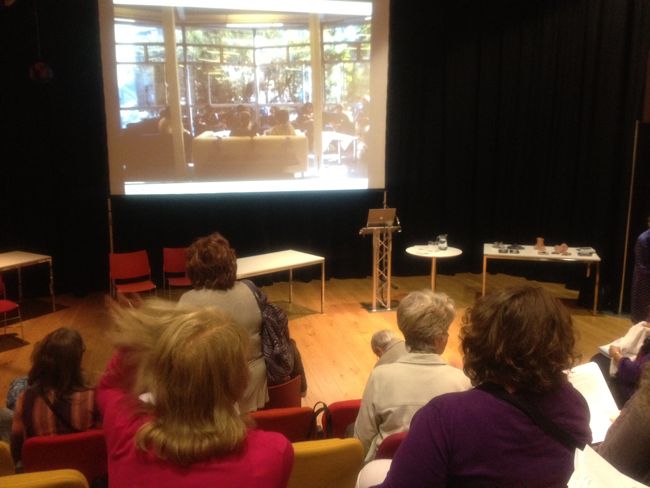 My own presentation, Unraveling Political Knitting, was a visual review of the historical roots of knitting and politics through the lens of American wartime knitting. It also covered the current wave of sculptural knitters who are crafting visceral responses to contemporary issues of war, climate change, species preservation – as well as yarn bombing the public square.  My talk was well received with the flattering request that I concentrate more on my own work at a future gathering. 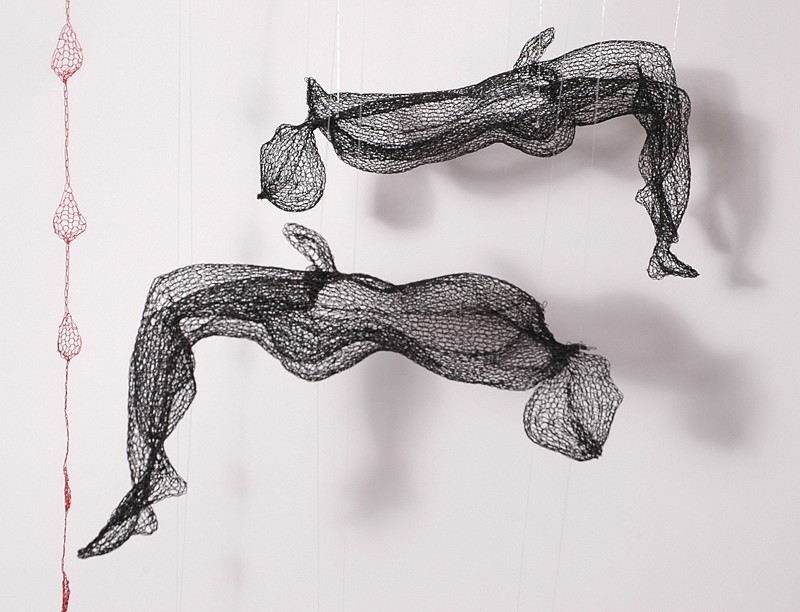 While there, I had the wonderful opportunity to meet some of the knitteratti whose work I have followed for some time, including sculptural knitters Freddie Robins and Anna Maltz as well as the well-known Danish designer and knit author Vivian Hoxbro, whose Shadow Knitting book cover is shown below, left. 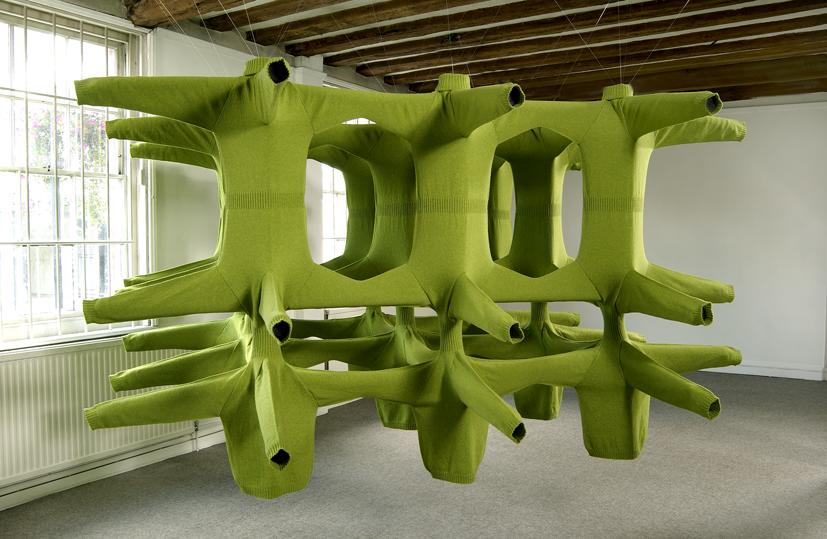 I so enjoyed meeting a Scandinavian contingent, including Annemor Sunbo. Her work is so revered in Norway that in 2012 she received 1 of only 2 stipends awarded by the Norwegian government to carry out her cultural preservation work. 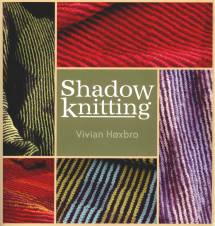 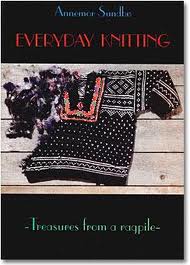 Her book Everyday Knitting: Treasures from a Ragpile (cover shown at right) documents her experience buying a decrepit woolen mill in the 1990s, where she found well-preserved knit fragments from throughout the last century. By studying these fragments, she has composed an historical record of Norwegian knitting over the last hundred years. Several more of her books continue to elaborate on knitting history of the area. Find out more about her work at www.annemor.com.

I also had the pleasure of meeting Hazel Tindall from the Shetland Islands, the site of In the Loop 2, who currently  holds the title of Fastest Knitter in the World from the 2008 contest held in Minneapolis, MN (in association with Craft Yarn Council of America). 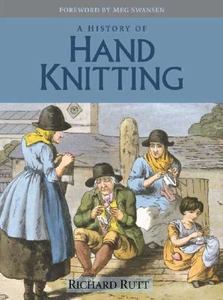 The conference was dedicated to the memory of Richard Rutt, well known author of A History of Hand Knitting (1989). His library, along with that of Montse Stanley, is now an integral part of the Knitting Reference Library at Winchester School of Art.

With 1 extra day to tour the city of Winchester, it was a delightful surprise to find a fiber installation honoring the recent London Olympics at Winchester Great Hall (along with King Arthur’s legendary Round Table) that was inspired by the French knitter Françoise Dupré.

Not only do I have no regrets over the shortness of this trip –  but I would happily repeat such a brief but rewarding overseas adventure if or when there is an In the Loop 4. 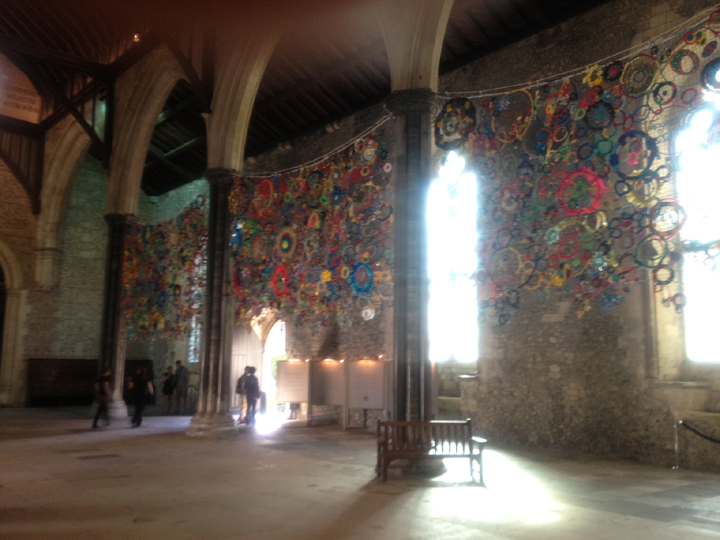 After all, who wouldn’t want to do some international networking and go talk knitting in either possible future sites of Ireland or Estonia?

(Editor’s Note: Knit Wits world wide can now track the evolution of the newly-formed Center for Knit & Crochet in Madison, WI at knittingheritagemuseum.wordpress.com) 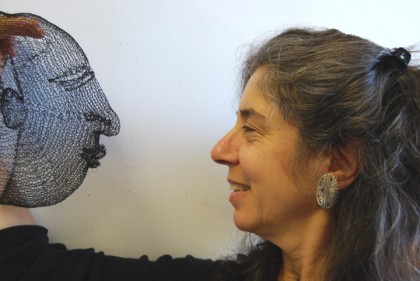 Adrienne Sloane has shown her work nationally for over 20 years.  An award winning artist, she teaches sculptural fiber internationally and has worked with indigenous knitters in Bolivia and Peru.

Her work has been published in Fiber Art Now, Fiberarts, American Craft, Surface Design Journal, The Culture of Knitting and is profiled in Knitting Art. Sloane has work in Philadelphia Museum of Art, Goldstein Museum of Design, American Textile History Museum and the Kamm Collection. Her curatorial work includes Beyond Knitting and Primary Structures exhibitions at San Jose Museum of Quilts and Textiles and Metaphoric Fibers in Minneapolis.