“In the Studio” with Sharon Peoples

I have worked as an artist in Canberra, Australia for over 20 years as both a hand and machine embroiderer, which seems to produce to two very different bodies of work. In 1994, I completed a Master of Visual Arts at the Australian National University and began my arts practice. I continued studying, graduating with a PHD in 2009 in Art History, writing a thesis on gender and fashion theory. Hence, I diverged down the path to academia, teaching and researching in museums studies, butI picked up the threads of my visual arts practice in 2010 after becoming Chair of the Board of Craft ACT: Craft and Design Centre in Canberra, Australia. I have been a member of SDA for two years, and I joined when I returned full time to studio practice and wanted to become familiar with the international scene of fibre arts.

I now start each day in the studio with mindful hand stitching. Towards the end of 2016 I wanted to get back to hand stitching, so on New Year’s Eve while many were preparing to ring in 2017, I was in a panic as to what and how to begin a new embroidery project. Sara Barnes wrote on her blog site Brown Paper Bag about the work of artist Hannah Claire Somerville. She, like many artists, began a daily practice that was documented on Instagram. For Somerville, it was stitching. I clicked to her webpage where set out rules and stipulations for herself. Yes! I thought, this is what I need.

That seemed easy enough. My education as an artist and work as an academic emphasised critical thinking, writing, and making. It was daunting coming up with imagery that I was going to stitch and post on social media for a year. 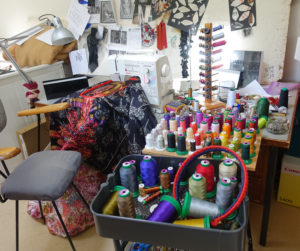 Start with something you know is a good maxim. Something I know very well is my own face. I quickly drew a self-portrait, then pinned and tacked the paper onto a piece of linen, pulling away the paper, leaving the design. I spent over eight months making and stitching 27 self-portraits on one piece of linen. 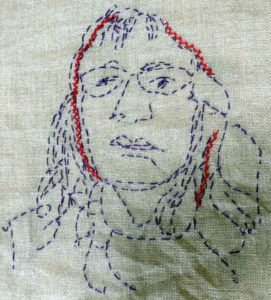 After I filled the linen, I stitched images of two small family members sleeping under a spotted quilt on black linen. I like the way you can play with light on the dark background. I used the same black linen for the image of my dying mother-in-law on her last day. By the end of the year I had slowed down my hand stitching, sporadically taking it up again in 2018. 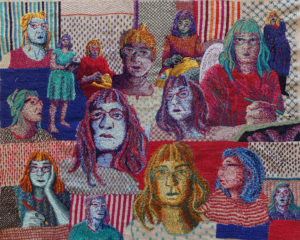 As I hand stitched my way through 2017 I was working towards a solo exhibition of machine embroidered work, Death of A Craft at Craft ACT. I was stitching figurative lace-like textile structures on soluble fabric. With the process came an intellectual shift: refocusing lace as a verb rather than a noun. I began using vegetation that was poisonous on ingestion and/or highly irritating plants as motifs to elucidate the idea of lacing—as in lacing a drink or food to cause harm. I used toxic and irritant plants that I saw on my early morning walks through the streets of Canberra: oleander, euphorbia, angel’s trumpet, and toadstools. 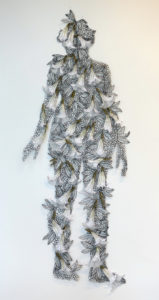 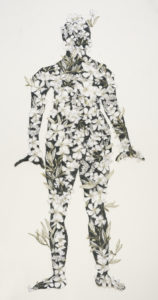 At first, I traced my own body but then began to photograph myself in various poses, using the outline to fill in with the vegetation. I consciously worked on the exhibition for two years, but it was only these full-sized figures made in the last six weeks that was exhibited. As I cleaned up my studio and prepared for a gallery floor talk, I went through my sketchbooks and found a couple of drawings I had made around five years ago on the idea about stitching a lace body. It is interesting how long the gestation of artwork can be. 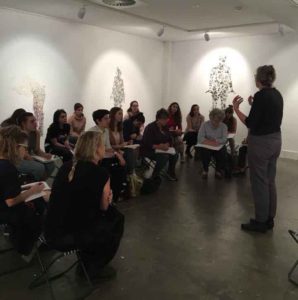 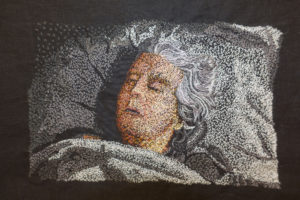 Australia , Canberra , In the studio , SDA In The Studio , Sharon Peoples