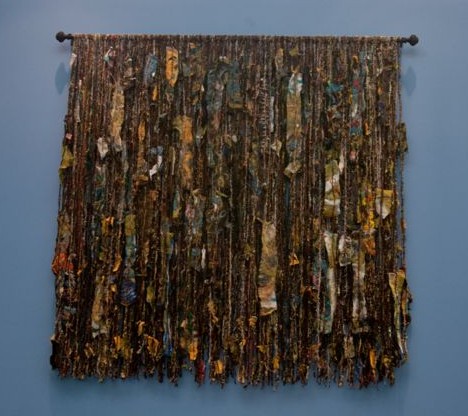 In 2009, there was a call-for-entries that resulted in Mayor’s Endowment Fund grants being awarded to 5 artists in the York area. The winning projects spanned the arts (drama, dance, etc.).

My piece, entitled UNITY, was funded with this grant through the office of Mayor Dave Barrow of Richmond Hill, Ontario. My proposal was to produce a work for a public space that was created by teaching students of the York region the art of felt making. Although I won the grant, the public space had yet to be confirmed. 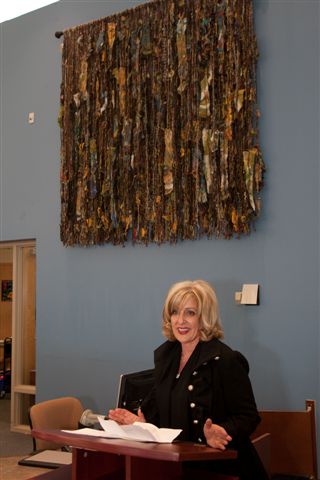 I contacted the Library Board of the region, who were very receptive to the project and willingly provided additional funds to complete it. The piece took several classroom visits with the participation of the Grade 9 class of Richmond Green High School and Grade 8 students of Redstone Public School. The work, measuring 8 feet by 8 feet, took about 3 months to prepare and 4 days to install. The colours of the wall hanging are blended to appear like a Canadian landscape.

As a textile artist and a graduate of the Ontario College of Art in 1984, my primarily focus is creating with textile media.  As my children have become more independent, I have had more time to concentrate on new original work. I frequently enter juried competitions and have exhibited in Canada, USA, and Europe. This includes grants and a scholarship to Mexico to further my studies.

I have been teaching in schools for about 5 years and most recently received a grant from the Ontario Arts Council to teach in 5 schools for the upcoming 2010/11 school year. I have worked within the private school system and in both Jewish and Catholic schools where I have also completed large installations for their foyers.

As a Board member of the Pomegranate Guild of Judaic Textiles, I have proudly facilitated exhibitions and, most recently, a successful show entitled Upon the Doorposts–a collection of mezuzot created by members of the guild. (Currently traveling across Canada and the USA). I have also been invited to join the planning committee of the Museum at the Baycrest in Toronto.

I’ve been a member of SDA for about 7 years, having attended several biennial conferences in Kansas City. I am also a member of the Handweaver’s Guild of America and attend their Convergence conferences; most recently in Albuquerque. I am a conference junkie!

I love to travel to places that I might not visit otherwise, learn new techniques and share with like-minded artists. I am looking forward to the upcoming 2011 conference in Minneapolis in June! (where the Pomegranate Guild/mezuzot exhibition mentioned above will be listed in the gallery guild and can be seen at Basilica of St. Mary’s).