“Without Boundaries” Review by Mason Riddle

Without Boundaries: Fiber Sculptures and Paintings by Women Artists is a one-stop-shop exhibition, and I liked it. Packaged in a single gallery, this is as smart and as suck-me-in a show as I have seen in a while. With material, color, and scale at the forefront, it establishes a visual matrix for understanding the linkage between painting and fiber art, through a mere 15 works made by 13 women artists. Only 6 are alive today. Most lived and worked in the mid-to-late 20th century. They embraced the feminist ethos in which they engendered, lived and created. The mantra “women’s work,” formerly an insult directed towards textile art—and women—whose native skills such as quilting, embroidering, weaving and sewing, and clothes and tablecloths and whatnot, were looked at sideways by men, i.e. the art world, could not have been more empowering to these women. They made sure that fiber art was no longer the crazy aunt of the art world. Rather it became a megaphone for power and creativity in the male-dominated art cannon, and it proved it could inform and cohabitate with the best of painting and sculpture.

Beginning in the 1970s, because of women like Claire Zeisler (1903-1991), Magdalena Abakanowicz (1930-2017), Sheila Hicks (b. 1934), and Lenore Tawny (1907-2007) fiber art, and all of its manifestation, built its own palace with a parapet to disseminate the women’s news. Their works are breathtaking in their scale, complexity and sophisticated color palette. Zeisler’s Buddy Balls, 1972, is a tour-de-force. Installed on a low circular platform in the center of the gallery, the work comprises some two dozen, non-woven wool balls ranging in scale from a small melon to a beach ball and in racy hues of red, yellow, orange and purple. Little kids run up to it, giggling and parents stand and take selfies. Yes, it is fanciful and forceful. 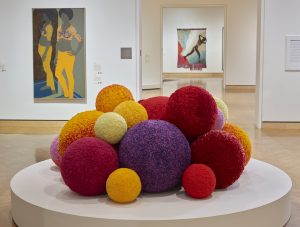 Stunning in its restraint is Abakanowicz’ sculptural wall-relief, Montana del Ruego (Mountain of Fire). Densely woven from a rust-orange sisal, the work suggests female anatomy and its inherent power. Hicks, who identified as a painter, is known for her fiber work of scale and presence. Evolving Tapestry: The Principal Wife, Yellow Decked, 1989, is a wall-relief of considerable scale, and features Hick’s keen understanding of wrapping techniques which she learned in Mexico. Made from bound and wrapped linen, silk, cotton, and wool fibers, the work’s long trails of natural-hued fibers are bound with yellow-orange-rust wraps, Evolving Tapestry suggests the exotic tails of an expertly-groomed horses. Tawny’s 1974 Red Sea, made from tapestry and knotting techniques of blood red linen fibers, shows her resistant to the constraints of working on a loom. Here, in a large-scale wall hanging, she has masterfully created a circle within a square format, a geometrical feat that is observed only from a distance. 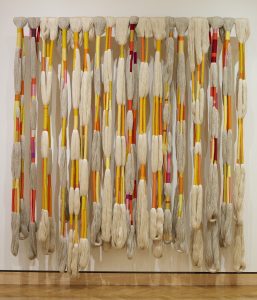 The 2017 Bale Variant No. 0034 (Everything) by Shinique Smith (b. 1971) is the lone work from the 21st century. But rather than being an impediment to our train of thought about the modern tradition of fiber art, it gives us a reference point. A towering square column of all manner of cloth, ribbon, clothes and other detritus, it seems to reference our chaotic times, one of conflicting paths and visions. 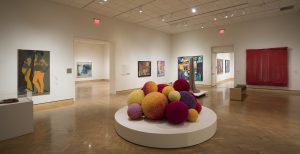 Although the relationship between the show’s fiber works and the paintings is not always obvious, no matter. That left the viewer to drill down a bit more and discover connections. The biggest surprise of Without Boundaries was the discovery of several drop-dead inspired paintings. In particular, Woman in Belgravis Hotel, 1969 by Philadelphia-based artist, Elizabeth Osborne (b. 1936), Gorodiva, 1968 by Miyoko Ito (1918-1983), and La Joie de ma mere, 1955 by Ethel Schwabacher (1903-1984) were revelatory. Osborne’s command of interior spaces and pattern is worthy of the Nabis master, Vuillard. Ito’s mastery of abstract form from layers of color in an indeterminate space is as mystifying as it visually seductive. And Schwabacher’s insight into the interconnective power of color, form and space on a 2-D surface, without a single concrete reference point, shows a prescient skill in embracing abstract expressionism. Titled in French, “My Mother’s Joy” the work recalls a time in her mother’s garden as a 5-year old. That Schwabacher was a painter, writer and civil-rights activist living in New York City, is revelatory. Thank you Without Boundaries for bringing to the forefront, how imperative it is that we are steeped in the work of women artists. 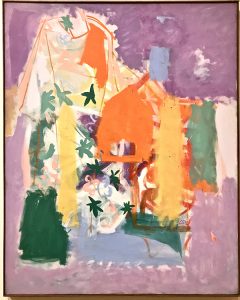 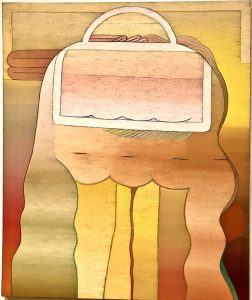 Without Boundaries is on display at the Minneapolis Institute of Art through October 13, 2019.