Quilts have become a popular topic for many contemporary art websites and blogs, and this week’s Friday Fibers Roundup brings you a batch looking at quilts from many different contexts. 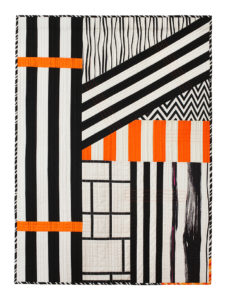 3) “Don’t Tell Ken Burns Quilts Are Quaint” by Judith H. Dobrzynski spotlights the exhibition Uncovered: The Ken Burns Collection featuring 28 of Burns’ prolific collection. The show will be on display at the International Quilt Study Center & Museum in Lincoln, NE until May 13th, 2018 (via New York Times).

4) “Tantalizing Quilts Woven with Poetic, Political Messages” by Melissa Stern looks at how various artists in the exhibition Piecework, embed intriguing, coded messages into their quilts (via Hyperallergic).

5) Selvage recently had an article on the famed Hudson’s Bay Company “point blanket,” originating in Canada, and how it has changed very little since it was first introduced in 1780.

6) “To Hold Ugliness and Beauty” by Jillian Steinhauer spotlights the work of Joyce J. Scott, whose art is unabashedly political: broaching subjects such as guns, racism, and misogyny (via The Nation).

7) “Quilts as Tools for Resistance” by Renée Reizman highlights the increasing numbers of politically-driven works in this year’s QuiltCon (via Hyperallergic).

8) Veronica Puskas, who grew up in Nunavut’s Kivalliq region, recently won an award for Excellence in Work at Quilt Canada’s national juried show (via CBC).

9) The College of Visual & Performing Arts at UMass Dartmouth have created a hand-made, reversible quilt which is being auctioned to support Houston Food Bank after Hurricane Harvey devastated much of southern Texas.

10) “The Common Threads Between Female Quilters and Abstract Expressionists” by Claire Selvin shows how, at one time or other, women’s craft was either considered lowbrow or was measured against the work of male contemporaries (via Hyperallergic).