Need some inspiration for new projects? This week’s Friday Fibers Roundup features paper patterns, colors, and forms to get you out of your rut. 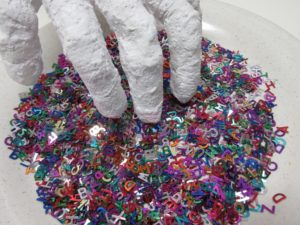 3) If you needed another dose of inspiration, this magnified peacock feather looks like a beautifully woven tapestry (via Wired).

4) In one of her most recent videos Chinese vlogger Li Ziqi presents the days long process of traditional Chinese paper making, a process which can be traced back to the early years of the Han Dynasty sometime within the 2nd century BC (via Colossal).

5) The article “Chemists go Green to make Better Blue Jeans” ponders various ways that indigo dyes can be altered to be more environmentally friendly (via Nature: International Journal of Science).

7) “19th Century Biologist’s Illustrations of Microbes Bring Art and Science Together” by Jessica Stewart looks at the recently reprinted The Art and Science of Ernst Haeckel. The art book features stunning biological illustrations that promoted Charles Darwin’s theories of evolution at a time when the ideas were under attack (via My Modern Met).

8) Janet Echelman’s newest net sculpture is set to be installed above the Madrid Plaza for the Plaza Mayor’s 400th anniversary (via DesignBoom).

9) German artist Katharina Grosse’s installation, The Horse Trotted Another Couple of Metres, Then it Stopped, encompasses an entire warehouse, transforming its raw interior into a soft maze of kaleidoscopic color using nearly 90,000 square feet of painted fabric (via Colossal).

10) “A Show That Requires a Different Kind of Looking” by John Yau features the exhibition ROYGBIV at the Kate Werble Gallery (New York, NY), and how it represents a diverse gathering of artists, veterans, and newcomers, with work that is abstract and figurative, from Portland to Tehran (via Hyperallergic).