Jumping the Shadow at Sapar Contemporary (New York, New York) features the work of Mulyana & Iwan Effendi, both Indonesian artists, in conversation with each other. Curated by John Silvis, the exhibition will be on display until August 21, 2020. Below is Silvis’ curatorial essay on the works of Mulyana and Effendi.

SAPAR Contemporary is pleased to present for the first time in NYC the works by two Indonesian artists, Mulyana and Iwan Effendi, both inspired by a puppetry tradition. The shadow puppet theater tradition (Wayang) has been woven into Indonesia’s cultural history for more than a thousand years. The term Wayang means shadow (as well as visual imagination) in Javanese. The two-person exhibition Jumping the Shadow at Sapar Contemporary, celebrates the New York City debut of Indonesian contemporary artists Iwan Effendi and Mulyana. Although their artistic lineages do not directly reference the history of shadow puppets, their work envisions imaginary worlds and characters that open up our minds to relevant narratives. The whimsical and animated characters in their work point to a rich tradition of story telling. 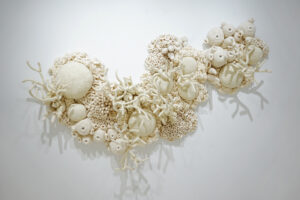 Effendi and Mulyana started their education at the UPI Fine Arts in Bandung, and at different points, migrated to the city of Yogyakarta. The city has an unparalleled density of artists and artisans, functioning as a thriving incubator for the Indonesian art scene. The rich artist tradition of the region supports artists at all stages of their career and is known for its collaborative spirit. This ethos has been a fundamental component of Effendi and Mulyana’s creative expression. 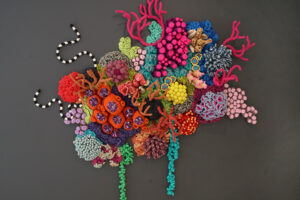 Effendi’s relationship to puppetry is a deeply personal one. His paternal grandfather, who was a political prisoner for several decades for his alleged communist views, was a shadow puppet master before he was incarcerated. As a student, Effendi focused on painting and print making, but was particularly inspired by comics as a young man. This became a driving vernacular for his Papermoon puppets, a non-verbal, performance theater group which he formed with his wife Ria Tri Sulistyani in 2007. The approach to puppetry as a tableaux vivant mimics elements of installation and performance art that engages the audience as a protagonist in the experience. 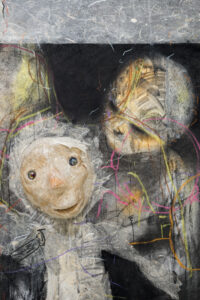 The most recent drawings and figures he created stand alone as objects embody a range of emotions and psychological states. Effendi intends for each character to portray a unique sincerity and the subtly of his Faces compel the viewer to look inward. His charcoal, mixed media drawings are so sensitively executed that they seem to emerge from a puncture in the wall. Particularly the mixed-media figures rendered in relief demand our attention. The kinetic puppet’s personas begin as drawings and are created using layers of papier-mâché and clay, to then be delicately mounted on sinewy bodices that are constructed with stockings, bamboo and cloth. 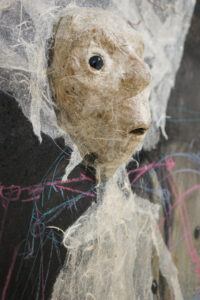 In the entrance of the gallery the viewer is greeted by a beautiful installation of suspended knit and crocheted creatures and a wall mounted Coral Island by Mulyana. Mulyana talks about the act of knitting and crocheting as a form of meditation and prayer. “In God’s eyes, our earthly being will eventually meet the Creator in a beautiful place,” is his motivation for caring about the environment and he views his artistic expression as a privilege to “show gratitude to the Creator who has blessed me with a sound mind and a healthy body for life on earth.” 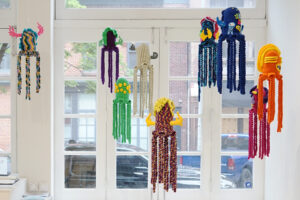 Mulyana employs and educates several groups of artisans to execute his vision of a captivating biosphere below the surface of the ocean. As a formation, the organic shapes are bound together by an invisible force as they occupy the floor, or wall, or hang from the ceiling. In Jumping the Shadow, Mulyana has created new characters and coral islands, and continues to expand the language of his avatar, the Mogus (octopus). Mulyana’s creatures cast beautiful shadows reminiscent of shadow puppet scenes but dazzle us with the beauty of their intricate details. The magical worlds he creates appeal to our collective consciousness—he believes that protecting the environment and being a good neighbor go hand in hand. Using re-purposed yarn, his collaborative practice invokes ideas of spirituality and community by a poignant portrayal of a magical underwater world that is quickly eroding. 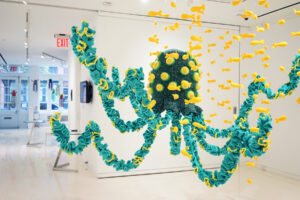 The pairing of Effendi’s and Mulyana’s work signals the importance of collective narratives that emphasize togetherness. With their installations and drawings they allow us to suspend our disbelief and immerse ourselves in allegories that elevate the human spirit. 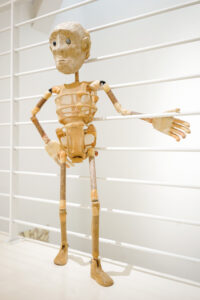 – John Silvis is a New York-based curator and art advisor. Silvis’ recent client research has taken him to Berlin, Indonesia and Vietnam. In addition to curating contemporary in New York and Los Angeles, he writes for Artsy, CNN and PARNASS.