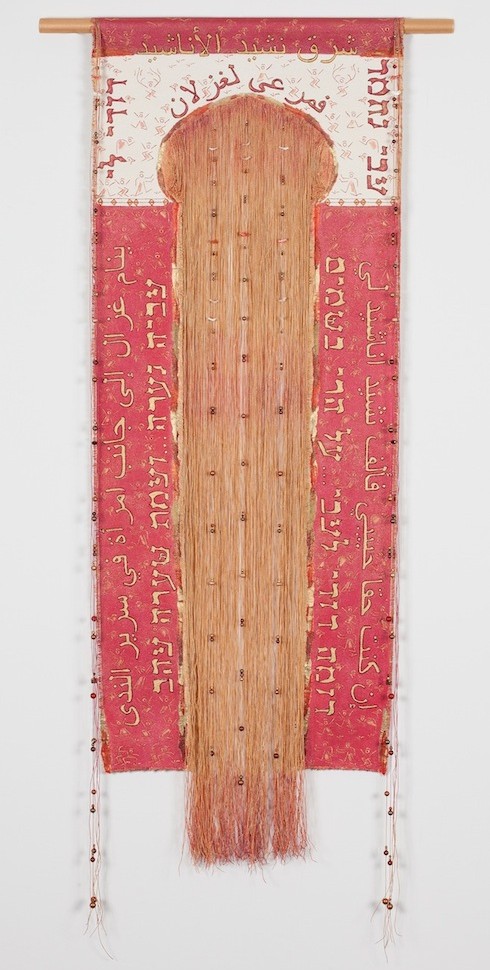 My Unweavings® fiber art pieces – using unwoven canvas, textured papers and other materials as a foundation – serve as my medium for integrating visual and tactile elements with spiritual texts. The calligraphy and my own iconography – raised from the surface of the textile – serve as conveyors of meaning and as part of the abstract patterning of each piece.

The catalyst for my current project – Birds of Longing: Exile and Memory – was the shocking events of September 11, 2001. Living in New York City – seeing the ash-covered window displays in the shops near Ground Zero, witnessing daily the pictures of those lost, I thought of this passage from Ezekiel – image of utter desolation, image of hope and resurrection:

“The hand of the Lord was upon me. . .and set me down in the midst of the valley which was full of bones. …and, lo, they were very dry. And he said to me, Son of man, can these bones live?. . . Thus says the Lord God to these bones; Behold, I will cause breath to enter into you, and you shall live. . .”

It took me until 2010 to form Ezekiel – my first response to September 11th.

At that point, I felt the urgency of expanding my earlier exploration of the relationship of Christianity and Judaism to include Islam. 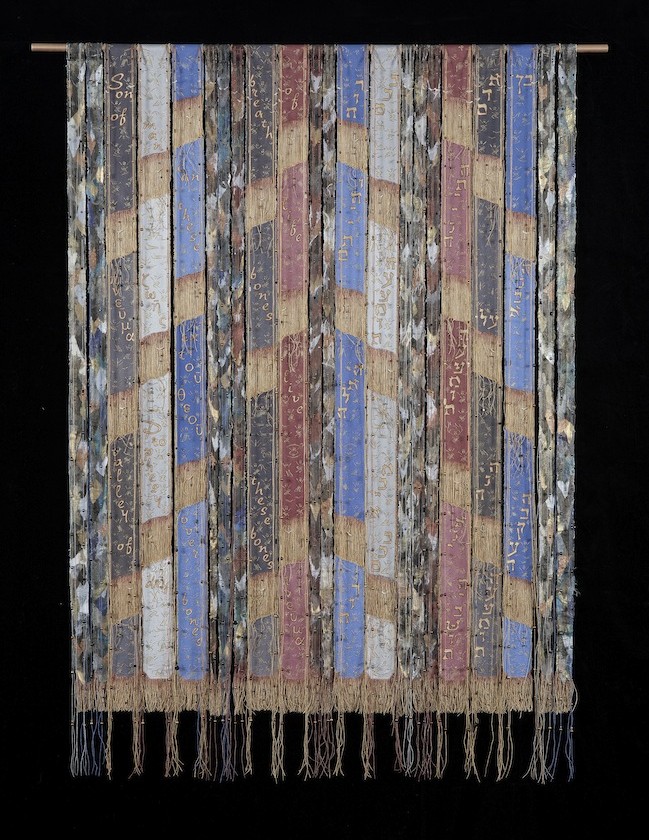 I began the project by investigating poetry and spiritual texts from the Spanish medieval period – the Convivencia – a time when the 3 Abrahamic religions coexisted, influencing each other architecturally, culturally, and linguistically, until the expulsion of the Jews in 1492. 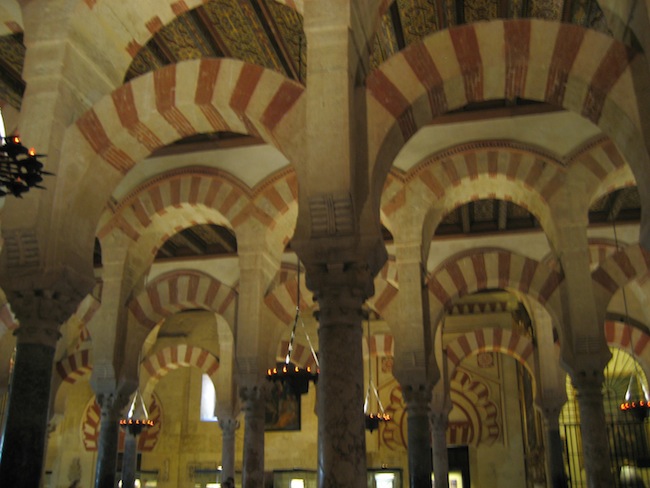 I expanded my research to include the powerful poetry of contemporary Middle Eastern poets, particularly Palestinian and Israeli. And I came to understand the striking parallels between Arabic and Hebrew texts, both rich in the poetry of spiritual love, with common themes of exile, nostalgia for Andalusia, fear of enemies, longing for reconciliation.

For instance, in Elegy for Cordoba, the medieval Muslim poet Ibn Shuhayd speaks of exile: “There is no one at the abandoned campsite to tell us about the loved ones” “And they were scattered in all directions.” Similarly, the medieval Jewish poet Moses Ibn Ezra writes: “The campsites are mute; they do not answer me” “With their tents they wandered.” 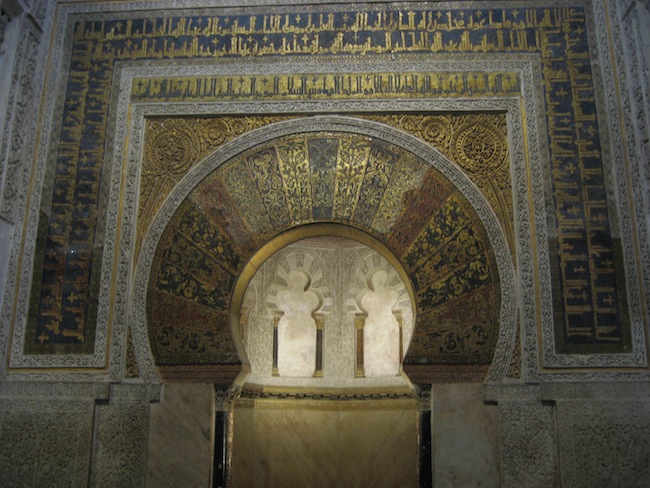 After a year of research, I received grants from Surface Design Association and from CARE (Center for the Arts, Religion & Education). I needed to travel to Spain in order to view the many examples of calligraphic art incorporated into the architecture of the period, and to immerse myself in the dominant forms of architecture – the horseshoe-shaped arches, the muqarnas (stalactite-like ceiling decoration), the mihrab (prayer niche in the wall of a mosque, indicating the direction of the holy city of Mecca). 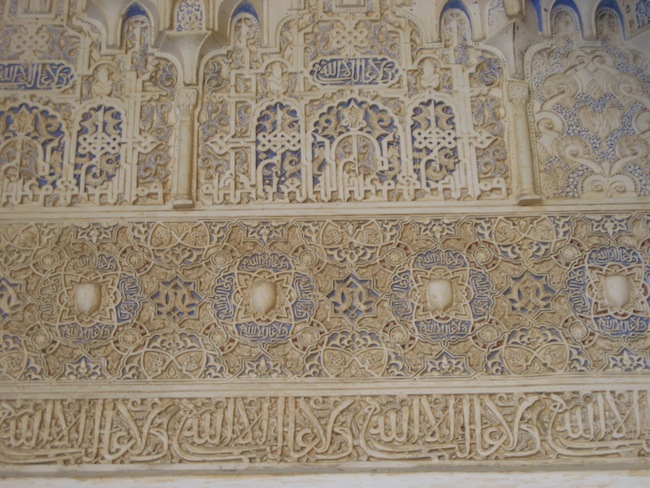 I also needed to hire native speakers of Arabic and Hebrew for word-for-word text translations. I also needed them to participate with a composer in the creation of a soundscape for the project.

The 2011 SDA Personal Development Grant was crucial. It enabled me to travel to 3 Spanish cities to view first-hand the interweaving of the cultures at particular architectural sites – El Transito Synagogue in Toledo, the synagogue and Mezquita in Cordoba, the Alhambra in Granada. 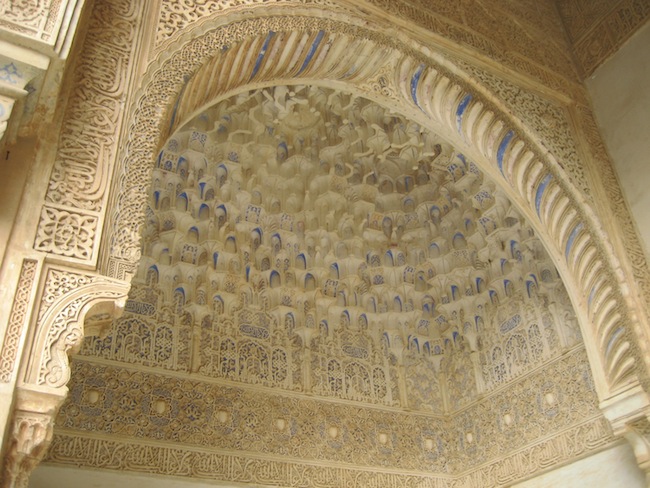 The synagogue architecture embodies Hebrew and Arabic calligraphy and Moorish designs. The Mezquita embodies the collision of Christian with Islamic Spain. The Alhambra is rich in parietal epigraphy – inscriptions on the walls – containing poetic texts and textile references within the architectural designs. 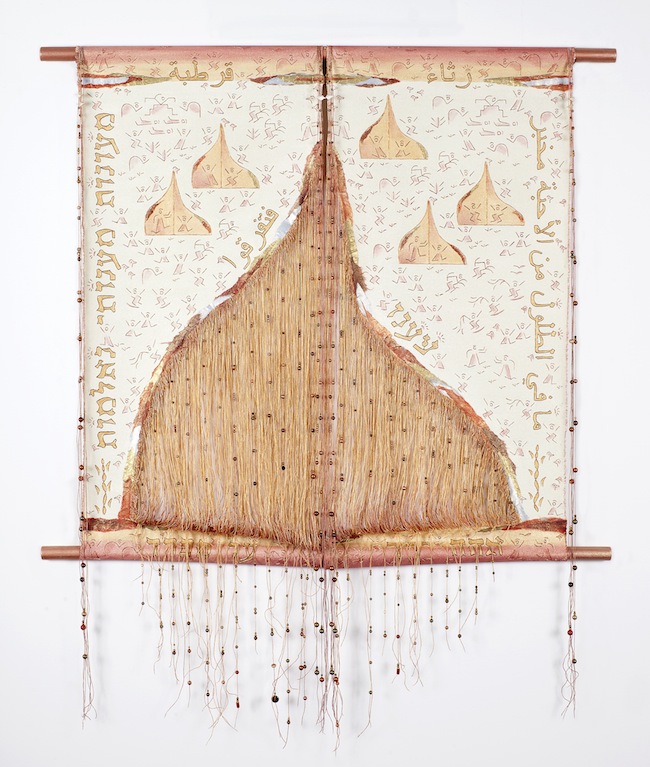 After unweaving 12 oz. cotton canvas into the desired shape, and applying a light coat of gesso, I apply my iconography and calligraphy with acrylic modeling paste, dripped off the end of a fine brush. Various fibrous papers are collaged for added texture and pattern, and some pieces have sand, pumice and fiber gel added. I then apply thin layers of acrylic paint. Where gauze is used, I dip it in diluted paint, then hand-paint the surface and embellish with fibrous papers. Various types of beads – e.g. crystals, gem stones, coral, bone – are affixed as the last part of the process. One of my clients who is a patent lawyer thought I should trademark my process and did it for me. 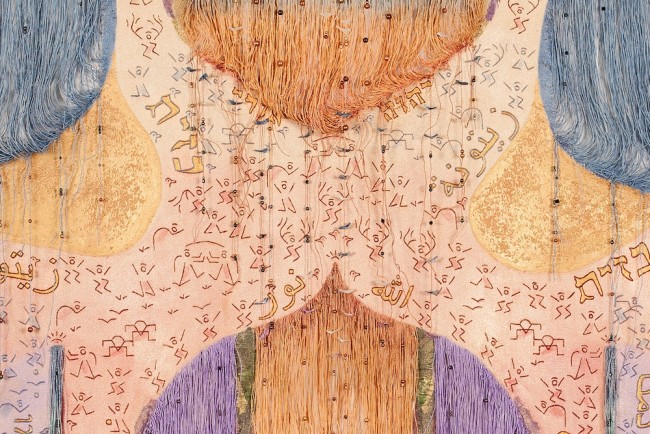 2 grants in 2011 and 2013 from CARE underwrote the inaugural exhibit in Berkeley, CA, plus the creation of the soundscape and a dance performance “response” to the work at the opening reception on September 11, 2013.

The 15 pieces constituting the project, in form and text, incorporate the wonderful shared imagery of the poetry: olive trees, birds, exile in the image of abandoned campsites, God as gazelle. Islam shares the Protestant and Jewish traditions of privileging text over image. 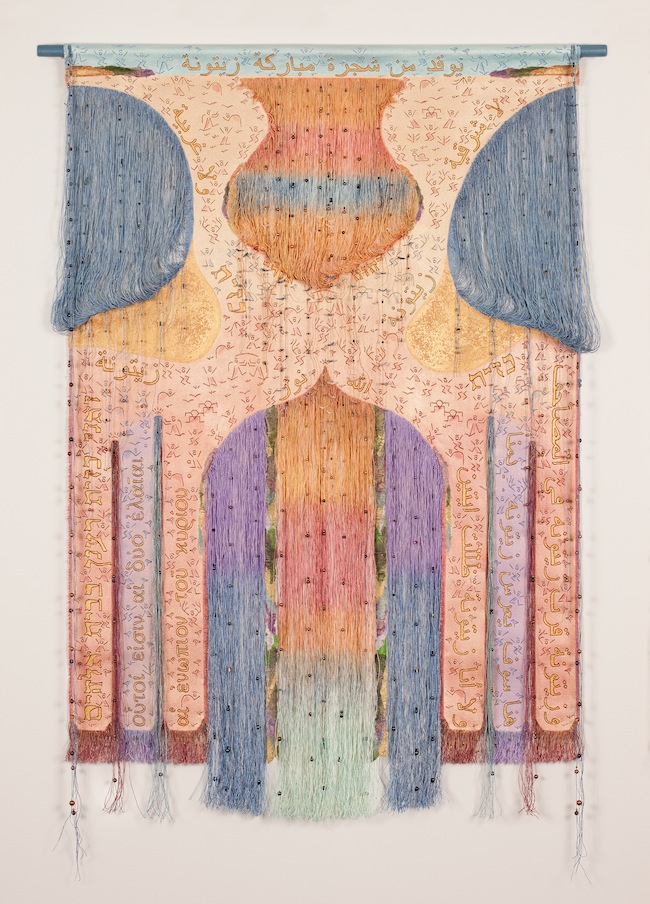 So my pieces visually interweave texts using Arabic and Hebrew, Greek, Latin and English calligraphy, as well as incorporating Islamic architectural forms, color references and the iconography of the veil. 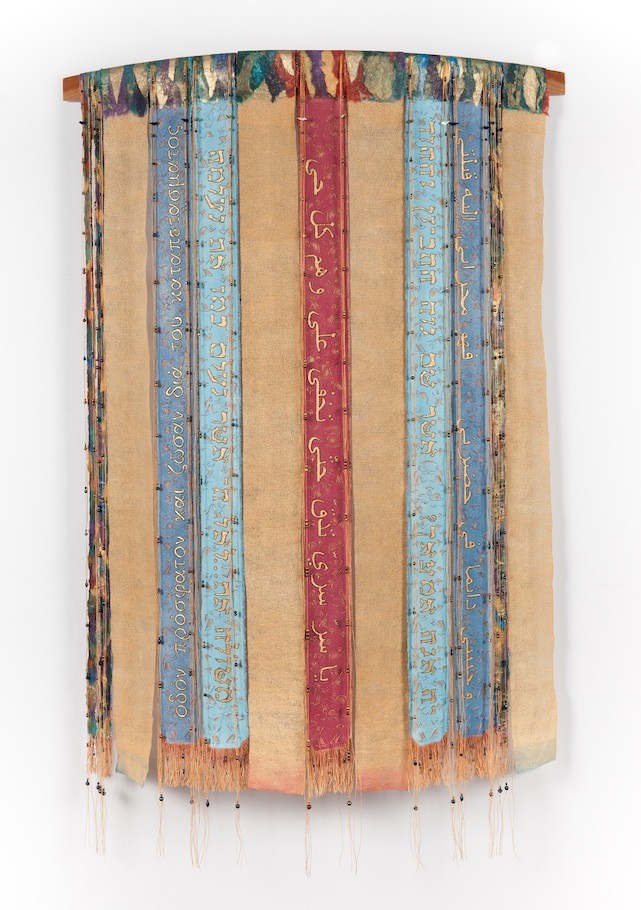 The soundscape consists of poems and spiritual texts read primarily in Arabic and Hebrew – the spoken words interwoven illustrate the commonality of the languages. Viewers are able to use iPods to activate the tracks relating to specific pieces as they move around the exhibit.

Birds of Longing extends my interfaith explorations and continues my exploration of the spiritual in art. 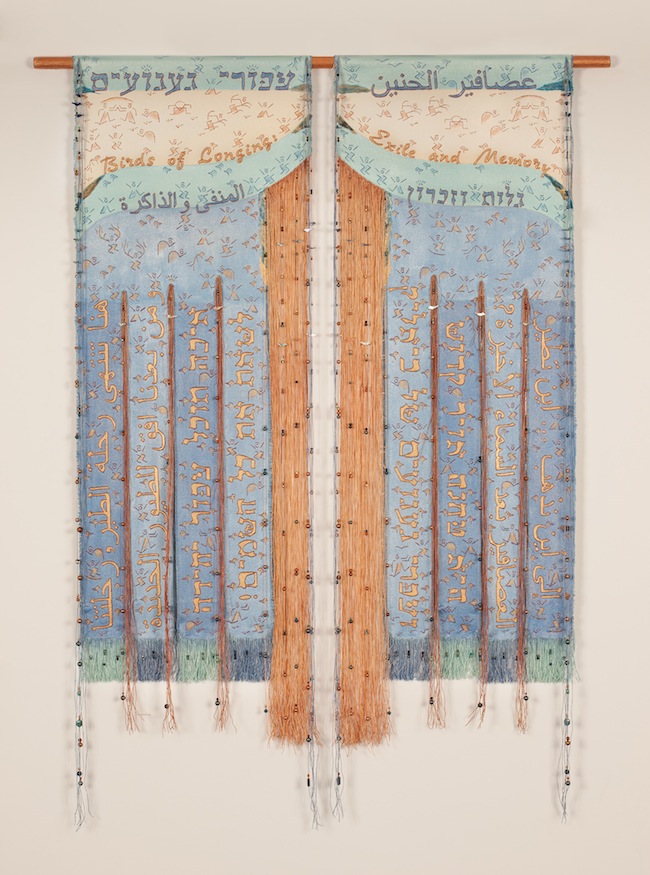 I hope that the visual and auditory impact will make vivid the connections among the Abrahamic religions and stimulate reflection on their shared emotional, aesthetic and thematic content. I hope to suggest a different way of seeing – and to offer healing. 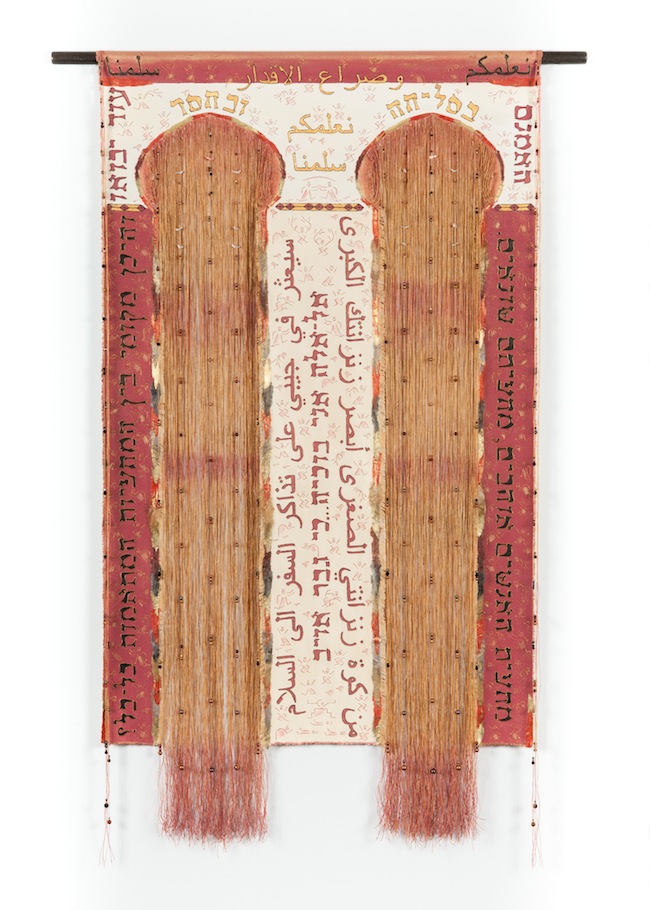 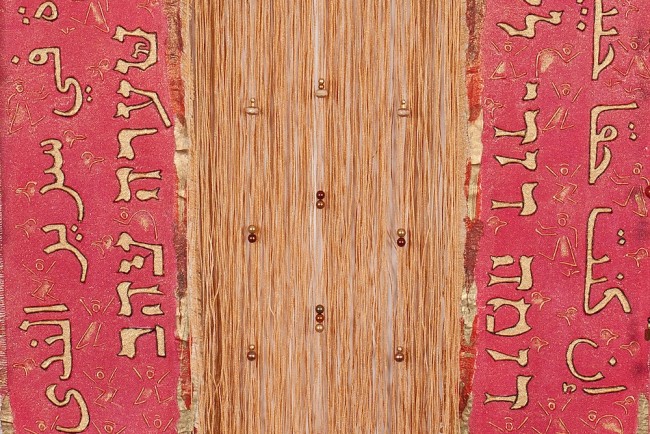 Find a list of upcoming show venues and dates by clicking on “Gallery” then “Interfaith: Birds of Longing” then continue to “Exhibition Schedule” at www.lauriewohl.com 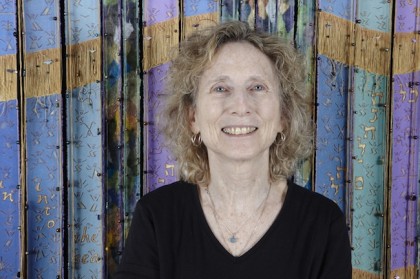 Laurie Wohl is a fiber artist internationally known for her unique Unweavings®, liturgical projects, and interfaith message. Her works, recognized by Surface Design Association and AIA Interfaith Forum, are held by the Museum of Arts & Design, American Bible Society, Constitutional Court of South Africa, numerous public and private collections and have been on loan to U.S. Embassies. 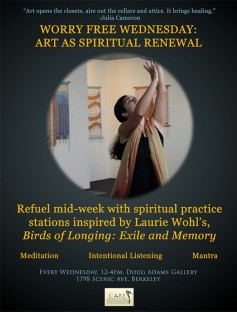 Wohl speaks frequently on art and worship; text and textile; and has created interactive sets for NYC and Chicago dance companies. Call to Worship, Fiberarts, Surface Design Journal and Seminary Ridge Review have featured her Unweavings®.

Wohl lives and works in New York City. Visit her website at www.lauriewohl.com